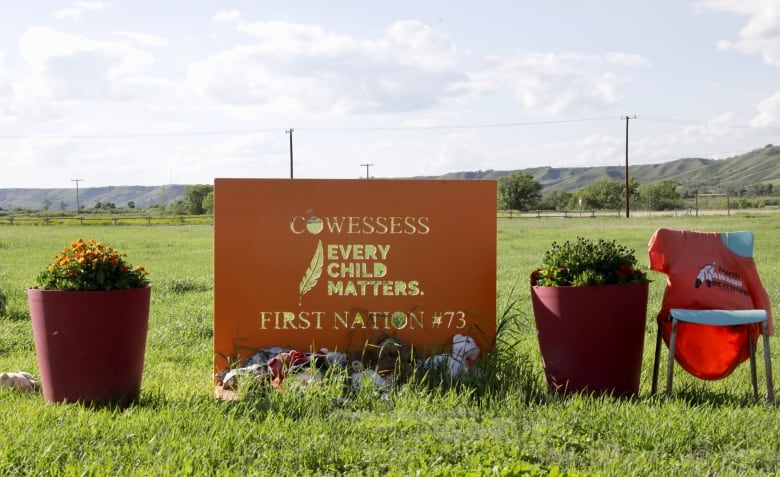 A year has passed since Cowessess First Nation Chief Cadmus Delorme announced to Canada that 751 unmarked graves had been discovered at the site of the former Marieval Indian Residential School, about 140 kilometers east from Regina.

Media around the world covered the story, featuring the First Nation in documentaries about the treatment of Indigenous communities and the legacy of residential schools.

Delorme said the unmarked graves started the First Nation on a path to healing as the rest of the world was forced to accept a truth the community already knew.

Oral history within the community said children and adults were buried there.

“It’s validation. Validation of the pain, the frustration, the anger, the fatigue of just trying to stay indigenous in a country that is still somewhat oppressive,” he said in an interview. this week.

The past year has been a difficult journey for his nation, the leader said.

“We have to show the action”

For nearly a century, the Catholic Church ran the school, stripping the children of their Indigenous heritage and identity while depriving them of their language and their ability to pass on their knowledge to their families – something Delorme calls the vertical line break.

Although he did not attend boarding school, his mother, grandmother, and great-grandmother did.

In these generations, they were unable to receive the traditional teachings. Instead, they went into what he calls “survival mode” as they suffered abuse.

“I’m so honored to share that my five-year-old daughter and my mom are very close again and so my vertical line is back,” Delorme said.

Although residential schools have ended in Canada, their legacy and generational trauma have not.

That is why it is important that Canadians accept the truth about what happened. Only then can reconciliation begin, he said.

“We, as a country, inherited it. Nobody today created the boarding schools, [the] Indian Act, [the] Sixties Scoop. So we don’t have to feel bad, but we have to show some action,” said Delorme.

“We need to show our residential school survivors that we are still watching. That as Canadians we know the truth now and we need to know more and we really need to implement reconciliation.

“They didn’t have that opportunity”

The discovery of unmarked graves at Marieval affected not only members of the Cowessess First Nation, but also residential school survivors across the province.

Charlotte Baldhead is a member of One Arrow First Nation.

She is a survivor of St. Michael’s Indian Residential School, located near Duck Lake, Saskatchewan, and was the fifth generation in her family to attend residential school.

Baldhead says the past year has been emotional as unmarked graves have been discovered at former residential schools across Canada.

On Thursday, Baldhead received his GED, or the equivalent of a high school diploma.

“I think back to my grandparents when they were in boarding school. They didn’t have that opportunity,” she said.

“So I feel like I’m doing them a great honor, for bringing me to this part of my life.”

WATCH | Disappointment on the Pope’s itinerary during his next visit:

Disappointment over the Pope’s itinerary during his next visit

The Vatican has announced that Pope Francis will visit Canada at the end of July, stopping in Edmonton, Quebec and Iqaluit. Some have expressed disappointment with his route.

In Cowessess, efforts to get answers around the 751 unmarked graves continue.

Consultation with Cowessess elders resulted in the decision not to dig graves.

Delorme has always been consistent in saying that the site served as a burial place for the community and that some of the graves are likely non-Aboriginal.

With data collection and ground penetrating radar nearly complete, efforts turned to collecting oral histories and documented evidence to identify who might be buried there.

This involved collecting documents, notably from St. Boniface Cathedral in Winnipeg, as well as from the archives of the Missionary Oblates of Mary Immaculate, which operated Marieval.

“We’re probably about a year and a half away from figuring out all the record names,” Delorme said.

LISTEN | Ask Me Anything: Chief Cadmus Delorme on Reconciliation:

Cross Country Record21:37Ask Me Anything: Chief Cadmus Delorme on Reconciliation

On the heels of the first National Day for Truth and Reconciliation — and an apology from Prime Minister Justin Trudeau for not following up on an invitation to spend the day with a First Nation in British Columbia — First Nation Chief Cowessess Nation, Cadmus Delorme, discusses reconciliation with Indigenous peoples, and answers questions from callers.

“A lot of community work”

The desire to learn and find answers does not only focus on the former Marieval boarding school.

First Nations across Canada, who have always been aware of the history of residential schools, are now trying to find sites where members attended and could be buried.

Kisha Supernant, director of the Institute of Prairie and Native Archeology and associate professor at the University of Alberta in Edmonton, says getting answers isn’t easy.

“There’s a lot to do in this job. It’s not just about removing ground-penetrating radar. There’s a lot of community work to do,” she said.

Supernant has worked with several First Nations over the past year who would like to excavate former residential school sites for unmarked graves.

There is a desire to get answers, but a lack of coordination and funding that would help facilitate the process, she said.

“Communities are scrambling, in some cases, to put together teams that can help with this work. But not all [First Nations] have the same capacity to do this, and they need help to build that capacity and ensure that their communities are able to carry out this work,” she said.

WATCH | Residential school survivors describe their expectations ahead of the papal visit:

Canadian Catholic Bishops have met with residential school survivors to hear what they are asking the Vatican to include as part of Pope Francis’ upcoming Canadian visit.

Coordination at the national level is needed, the recent federal appointment of a special interlocutor for unmarked graves being an example of what is needed.

Supernant stressed that it’s not just the technology that needs to be funded. The healing process must be supported, she says.

The work across Canada has only just begun and the journey to uncovering the truth can be long.

“A difficult story to understand”

For some members of Cowessess, healing means justice.

Delorme says Marieval survivors have expressed a desire to see charges brought in relation to the unmarked graves. However, we don’t know what the future holds.

The gravestones at the site were removed and bulldozed by a priest in the 1960s.

This week, Delorme said their initial desire to bring charges under the provincial Cemeteries Act, which makes it a crime to remove headstones, is unlikely due to the long period since the incident and the death of the man who ordered the removal.

Delorme says they continue to treat the site as a “crime scene”.

“We’re just collecting data to see if anything will be validated as we move forward. To date, we don’t have a lot of validation for criminal activity. It’s just telling the real story and that’s a story. difficult to understand.”

Support is available to anyone affected by their residential school experience or recent reports.

A National Indian Residential Schools Crisis Line has been established to provide support to former students and those affected. People can access emotional referral and crisis services by calling the 24-hour National Crisis Line: 1-866-925-4419.

With Rohit Sharma Covid Positive, here are the top picks...

Trump reportedly made $1.3 million in political contributions to his...

Private air travel is taking off – but can it stay...

Jabalpur News: Body of a model immersed in Bargi Dam was...

With Rohit Sharma Covid Positive, here are the top picks for...

Trump reportedly made $1.3 million in political contributions to his own...