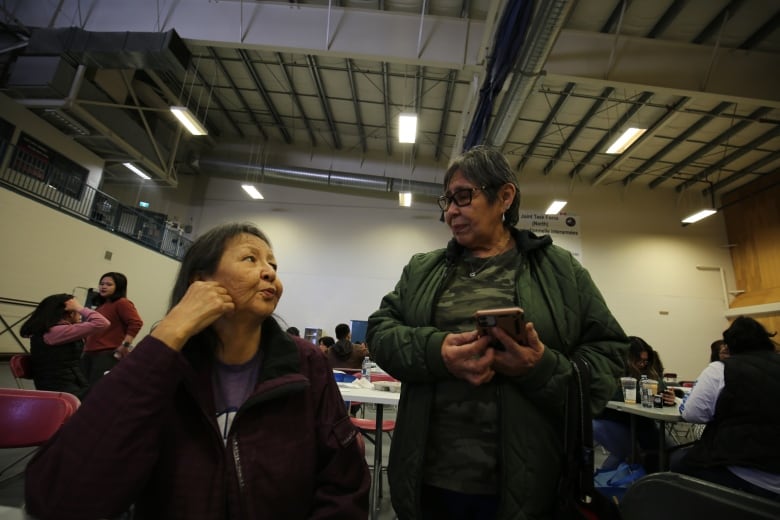 Since the early hours of Thursday morning, displaced residents of Hay River, Northwest Territories, and Kátł’odeeche First Nation have been looking for places to stay. Some have chosen to seek refuge with family and friends or book hotels, but many are dependent on evacuation centers.

At a public briefing on Thursday, the Northwest Territories government said there are evacuation centers in Yellowknife, Enterprise, Fort Smith and Fort Providence.

Initially, displaced residents were asked to come to Enterprise for more information, or to the Yellowknife multiplex.

Last Friday, some were still arriving at the multiplex, where they tried to stay positive, even if they did not know the full extent of the damage that awaited them.

In the refectory, Rita Plunkett and Elaine Lamalice spoke about the last few days and reflected on the gravity of the situation.

Plunkett spoke to people who have lost everything, but she tried to remind them that “material things can be replaced, it’s life that’s important,” she said.

While there is cause for concern, they are grateful for the sense of community and support they have received at the multiplex. Especially for the staff, who they say provide great food and great support.

Walter Selamio arrived by bus a few days ago. When asked where he lived, he pointed to the evacuation center and replied “here, for now”. He said he usually stays at the Hay River shelter.

Overall he is also grateful for all the support provided.

“Everything is fine,” Selamio said. “At least we’re not underwater [here].”

Dolly Martel lives in Yellowknife, but was born and raised on the Kátł’odeeche reserve. She currently has about 12 or 13 evacuees staying with her. Some are with family, others just needed a place to stay.

“I know what it’s like to feel when you have nowhere to go, so it was really important for me to open my doors to my family or anyone,” Martel said.

Now she is trying to find places to house the elders, so they don’t have to sleep on a cot and worry about getting sick or feeling uncomfortable.

She also urges people to help anyone displaced in any way they can, which includes just being kind.

“There are a lot of people walking around feeling lost. Some of them won’t return home…some of them have lost all of their belongings,” Martel said.

One simple way to help ease the immense weight people feel is to give back.

“When the community comes together, anything can happen,” she said.

Ahead of the spring breakup this year, Cathy Blondin said anxiety levels were high in Fort Simpson, Northwest Territories.

“It was all really traumatic for all of us. It brings back all those memories of last year and how scary it was,” Blondin said.

That’s part of why she felt compelled to raise money for flood victims this year.

“You want to help them so badly because you had this experience yourself, didn’t you?” Blondin said.

The recipients were incredibly grateful for the level of support they received, but some donations were a bit odd.

For example, a pair of golden heels. One show was auctioned off, fetching around $3,000. They are doing the same this year with the other gold heel.

Blondin also said they are holding a silent auction and a few other events in the community to help raise funds to support Hay River and the Kátł’odeeche First Nation.

According to a public notice posted on the Village of Fort Simpson’s Facebook page, co-signed by Mayor Sean Whelly and Łı́ı́dlı̨ı̨ First Nation Chief Kų́ę́ Kele Antoine, the community “offers space for those who can travel to our community.”

Although the community is currently disconnected from freeway access because the ferry has not yet started operating, the public notice stated that “if you are driving to the ferry, we have resources to get you across people until our ferry is in place”.

Support from the North and beyond

Yellowknife businesses have also stepped up their support for flood victims this year.

Haylani Apparel in Yellowknife is donating 10% of its sales “for now,” and Coyote’s Bistro in Yellowknife is offering 25% off all food orders for displaced people. Happy Pooch Grooming also offers a free grooming service for relocated pets.

Many GoFundMes have also been created by organizers across the country, including British Columbia, Nova Scotia, Yukon, and Alberta.

How an iceberg lettuce put the cost of living at...

Saskatchewan. Prime Minister hints at affordability relief if there...

Fire at Geneva airport: Black smoke rises from the hangar...

What’s open and closed in Kingston, Ont. during the...

How an iceberg lettuce put the cost of living at the...

Saskatchewan. Prime Minister hints at affordability relief if there is...