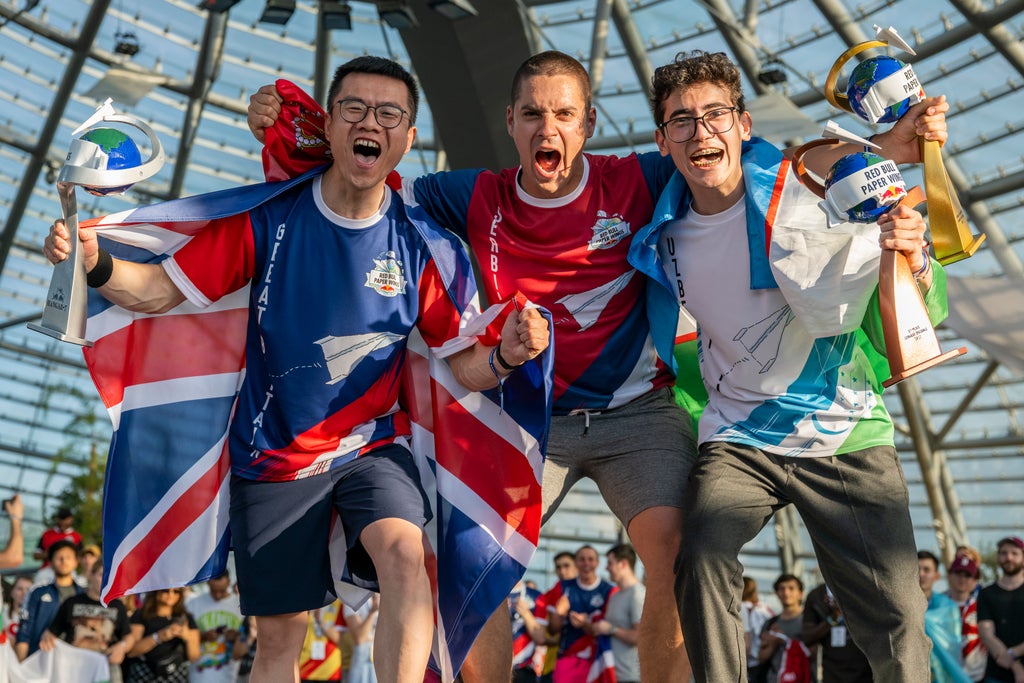 An aircraft designer representing Britain at the world’s biggest paper plane throwing competition has said he was “astonished” to have won second place.

Yicheng Sun, 32, was crowned second in the Red Bull Paper Wings World Super Final by throwing a paper plane a distance of 57.07 meters.

“When the competition starts it’s really tough but I decided to take a risk and ended up with (the silver trophy).”

Competitors from around the world were challenged to come up with the best aerodynamic designs and techniques in three categories: longest distance, longest airtime and aerobatics.

The planes can only be modified by folding – no tearing, gluing, cutting, stapling or weighting of the plane is allowed, and the event was monitored by Guinness Book of World Records officials.

The 21-year-old even stepped in to entertain the crowd with his spontaneous dance after the event space was overheated and the competition was briefly interrupted.

Mr Smith told PA: ‘They had to turn on the air conditioning so I couldn’t launch my plane…so I was in the middle trying to entertain the crowd, dancing and doing all sorts of things .

“I don’t have muscles myself, so I thought I’d wear fake ones – a six-pack and good pecs – to use them to my advantage.

“I (wanted) to distract everyone so they don’t pitch so well in the competition.”

Connor Wynn, 25, from London, represented Great Britain in the aerobatic category and finished in seventh place.

“I never represented Great Britain for anything…I lost my voice from shouting and supporting (my team-mates).

“Granted, it’s paper airplanes and it’s not the most athletic sport, but there’s still skill involved.

“The atmosphere was incredible all weekend, a real electric atmosphere.”

Although he did not win, Mr Wynn’s performance left a mark on Judge Costa who was impressed by the Briton’s decision to perform dressed as the superhero Batman.

“I really wanted to have a selfie with Batman,” Costa told PA.

“It’s a shame my son wasn’t there because he’s a big Batman fan and he would have loved it.

“Competitors use paper airplanes, which is something we all grew up with, especially when I think back to my childhood dreaming of being a pilot.

“It’s great that Red Bull is using this as a tool to bring people together from all over the world.”

Other highlights of the event saw aerobatic winner Seunghoon Lee of South Korea propose to his girlfriend after being crowned champion.

Mr Lee, who was dressed in a black three-piece suit, knelt down in front of the packed Hanger 7 crowd and asked his girlfriend to marry him, to which she said yes.

Amity University organizes the DST-STUTI program in collaboration with NIT...

A 62-year-old woman died after a head-on collision north of...

“A lot of people had abandoned me” -Dinesh Karthik after...

First of three flights carrying about 900 Ukrainians to Canada...

A family in Nova Scotia displaced after their home burned...

Quad will tighten the screws on China, illegal fishing will be...

A 62-year-old woman died after a head-on collision north of Edmonton ...

Anubrata Mondal: Not in good health, less likely to go to...

What is Quad, why China irritates: PM Modi in Tokyo reiterates...

“A lot of people had abandoned me” -Dinesh Karthik after the...

First of three flights carrying about 900 Ukrainians to Canada lands...