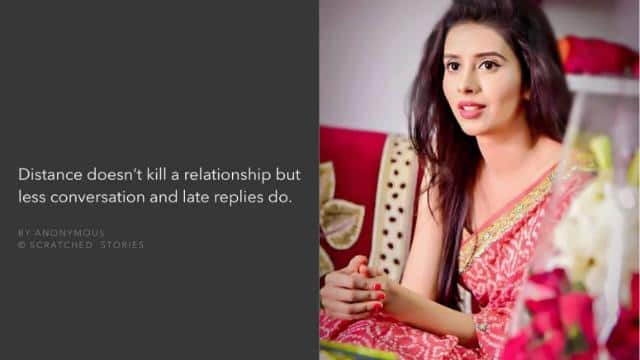 The personal life of actress Charu Asopa and Rajeev Sen remains in the headlines these days. There are constant reports of rift in their relationship and it is being said that both may get divorced soon. Charu had deleted all the photos of husband Rajiv from her social media account. Since then the news of their separation came out. The couple also has a 7-month-old daughter, Gianna. So far no one has said anything about this and it was believed that everything would be fine. But the recently shared post of the actress has again surprised everyone. Charu has shared a story with her Insta handle, which is becoming increasingly viral.

Charu Asopa is very active on social media and often shares something. Meanwhile, he has shared a story with his Instagram handle. It is written in this story, ‘Distance never ends a relationship, but less talk and late reply end.’

The actress posted a photo of herself in the next Insta story, in the caption of which she wrote, ‘Honor yourself and get away from everything that is not making you happy or moving forward.’ Fans are again upset after seeing this post of Charu and they are questioning him by commenting. Looking at both these posts, it can be said that things are not improving between the actress and her husband.

Charu Asopa and Rajeev Sen They had decided to get married after dating each other. Both got married in the year 2019 and in 2021, a daughter was born to the couple. The couple has named the daughter Jiyana, on which Charu’s sister-in-law i.e. actress Sushmita Sen showers a lot of love. For the time being, everyone wants Charu and Rajeev’s relationship not to break and both of them handle it together.

Suffering from waterlogging due to light rain, traders blocking the...

Woman and her 6-year-old daughter gang-raped in moving car: Uttarakhand...

Jadavpur University banned entry of professor into the campus allegedly...