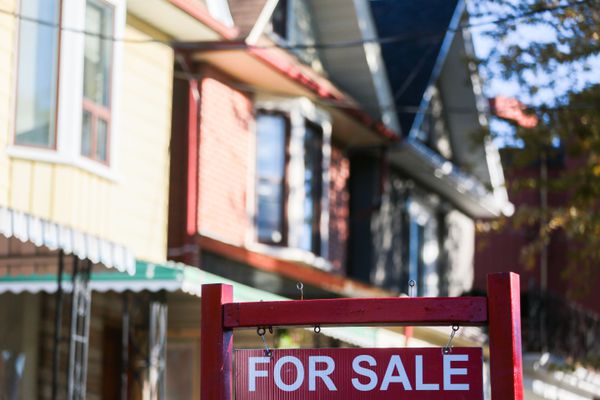 On paper, the Canadian housing market remains firmly in seller’s territory. But in some parts of the country, slowing home price growth and soaring mortgage rates are tipping the balance of power toward buyers faster than the statistics suggest. That means everything from scrambling to line up a mortgage, to fewer bidding wars, to deals that – again – include the right to a home inspection.

When you look at the numbers, the market has simply pulled out of an unprecedented frenzy, says Ben Rabidoux, founder of North Cove Advisors, a market research firm.

“It’s like driving 150 kilometers per hour on the highway for a while and then slowing down to 100 km/h,” he said.

In March, however, the Canadian housing market still had only 1.8 months of inventory, meaning it would have taken less than two months to sell all listed properties at the current rate of sales. Although this figure is up from the all-time high of 1.6 months in the previous three months, it usually takes at least six months of inventory for conditions to resemble a buyers’ market.

But in some particularly overheated areas, like the Greater Toronto Area, even the moderate market slowdown seen so far has already caught up with some sellers. These are often homeowners who have purchased a new property near the top of the market and can no longer sell their old home at the price they expected, said Daniel Foch, real estate broker and analyst at Foch Family Real Estate.

Another source of stress for some currently entering into purchase agreements: appraisals ordered by lenders are well below the contract price buyers committed to earlier this year, according to Foch.

Low appraisal values ​​usually mean buyers won’t be able to borrow as much as they need from the bank they had lined up for the mortgage. So the options are to put in a larger down payment, borrow from friends and family, or take out a private mortgage to fill the gap, Foch said. However, as the market cools, it becomes increasingly difficult to find lenders for such transactions, he warned. Buyers who back out of a purchase agreement typically forfeit their deposit and could be subject to legal action, he added.

In April, Toronto saw its home price index, the industry’s favorite indicator of home value, fall 1.6% from March, the first monthly decline since October 2020. In comparison, the he index had climbed by a record 3.5% between January and February alone. Nationally, the home price index has continued to climb so far this year, although the pace of monthly growth slowed to 1% in March. The Canadian Real Estate Association has yet to release April data.

In Toronto, outlier offers helped propel home prices higher during the pandemic housing boom, Rabidoux said. Buyers could submit firm offers above the market price and count on home valuations catching up by the time an appraisal is made several weeks later, he added. At the same time, the closing price for this property would become a benchmark for similar listings in the same area.

But now that the market has turned, these aggressive offers are accelerating the downward price adjustment, according to Rabidoux. Indeed, low appraised values ​​can force sales at significantly lower prices, which will also weigh on the valuation of nearby comparable properties, he said.

“You’re going to have this turbulent period this spring as we work through these struggling sells and you won’t really have a sense of the true direction of the market until late summer,” Rabidoux said, speaking of Toronto.

In much of the rest of the country, the real estate market is enjoying a soft landing so far, several real estate agents told The Globe and Mail.

In Halifax, for example, estate agent Andrew Perkins said multiple offers on a property remain fairly common, although there has been a marked change in pace from four months ago, when a house coveted could attract more than 60 buyers. These days, he said, a hot property might receive eight to 10 offers.

Yet there is no doubt that the balance of power between buyers and sellers is changing. Buyers, who are much quicker to adjust their expectations in a slowing market, are less likely to get caught up in a bidding war and more willing to wait on the sidelines for a bargain, said Phil Soper, president of Royal LePage.

Sellers, on the other hand, generally tend to cling to outdated expectations for price growth, he added. The result is that a “chasm” opens up between buyers and sellers, meaning fewer homes will sell, he noted.

Buyers and sellers still hoping to strike a deal this spring and summer may want to turn to a playbook the industry hasn’t used since 2017 and 2018, when activity slowed after the introduction of several measures, including the federal mortgage stress test. , aimed at curbing runaway prices in Vancouver and Toronto.

Sellers may need to limit their price expectations, but also avoid undervaluing their property in order to trigger a bidding war that might not happen, Foch said.

“A lot of agents are still trying to use this underpricing strategy to get lots of visits and lots of offers,” he said. But while multiple offers haven’t completely gone away, even in Toronto, “I think buyers were tired and tired of this as a listing strategy a long time ago,” he added.

The risk is that an undervalued property that hasn’t attracted a high enough bid will have to be relisted for a higher price, he said.

The days when homeowners could sell a property in days without even a fresh coat of paint are also on the way out, Mr Soper laments.

“You absolutely have to be prepared to make your property and your listing stand out in a market where you will have competition from other other listings,” he said.

Buyers, meanwhile, are now more likely to be able to insert certain terms into their offer to purchase. Home inspections, for example, are making a comeback even in Toronto, Foch said. Some buyers are even including a clause that gives them a deadline to get a mortgage for the home they want to buy, though such financing terms remain rare in the city, he added.

“Sell before you buy” is another piece of advice some homeowners may want to heed again, Mr. Foch said.

Cautious owners may want to choose a 16-week closing period, Mr Soper said. Across the country, that should be enough for a properly appraised property to find a buyer and the seller to find another property to buy.

“Change in the market provides the opportunity to buy when you find the right home,” he said. At the height of the pandemic housing frenzy, he recalled, some homeowners were “terrified” to list their homes even if they had to move because “they feared they wouldn’t find housing”.

Are you a young Canadian with money on your mind? To set you up for success and avoid costly mistakes, listen to our award-winning Stress Test podcast.

Post-Chill Real Estate Market Is Giving Homebuyers Some Leverage Back – The Globe and Mail appeared first on Canada News Media.

Kareena Kapoor Khan becomes a cheerleader for Taimur as he...

Cats and kittens rescued from ‘unsanitary’ home in Surrey OCN...

Curtin voters no longer have the ‘luxury’ of caring about...