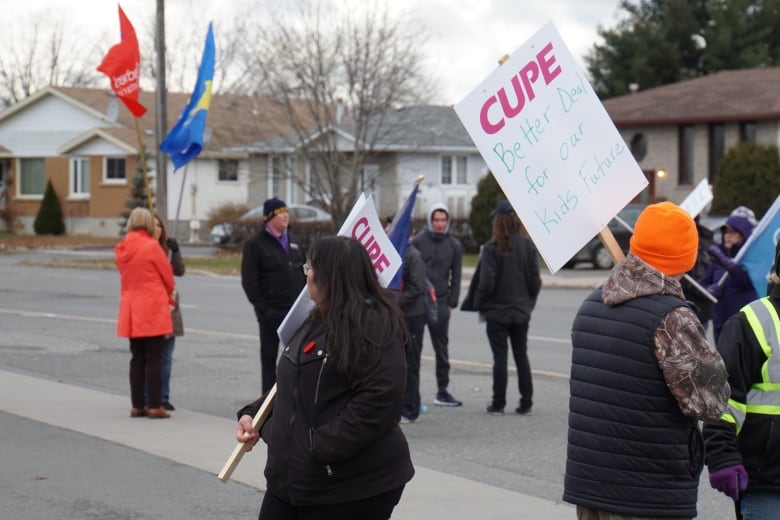 Thunder Bay education workers are on an indefinite strike along with 55,000 of their provincial counterparts and set up a picket line after the Ontario government passed a controversial law that imposed a contract and made it illegal to strike action.

On Thursday, the Progressive Conservative government signed into law Bill 28, which imposed contracts on 55,000 members with the Canadian Union of Public Employees (CUPE) and prohibited them from striking. The law also uses the notwithstanding clause to protect against constitutional challenges — a legal mechanism that has been used only twice in Ontario history, both times by Premier Doug Ford’s governments.

Although Thunder Bay doesn’t have a large contingent of CUPE workers in its schools, there was still a presence at Progressive Conservative MP Kevin Holland’s office on Friday.

“So far things are going great,” said Devin Klassen, CUPE Local 2486 steward and Lakehead District School Board janitor. “It’s great to see so many workers supporting CUPE’s fight for a fair deal, and we are joined by many other workers and labor groups in Thunder Bay.”

Education workers – who include administrative assistants, cafeteria staff, janitors and tradespeople – had to picket there all day; Klassen said Holland was one of the lawmakers who voted to pass Bill 28 on Thursday.

Klassen said he was also on the provincial bargaining committee and returned to Thunder Bay late Thursday night.

“We sat at the negotiating table for days,” he said. “The government never came to see us.”

Klassen said wages remain a big issue for CUPE, with many members having to work second jobs to make ends meet.

“We haven’t seen a substantial increase in wages over the last 10 years,” he said. “Job security is also obviously a very important issue for us as well. Same for working conditions.”

CUPE said the framing is not precise because the increases actually depend on hourly wages and pay scales, so the majority of workers who earn less than $43,000 a year would not get 2.5% .

CUPE said its workers, who earn an average of $39,000 a year, are generally the lowest paid in schools and have asked for annual wage increases of 11.7%.

The union said it had cut its wage proposal by more than half in a counter offer it delivered to the government on Tuesday night and had also taken “substantial” action in other areas. However, the government has said it will not negotiate unless CUPE calls off the strike.

Lakehead Public Schools said all of their schools will be open, as will the Keewatin-Patricia School Board.

However, the Kenora Catholic District School Board announced that its schools will all be closed on Friday due to a sympathy strike by the Ontario Public Service Employees Union.

The North West District Catholic School Board said its schools will also close on Friday and will remain closed “until further notice”.