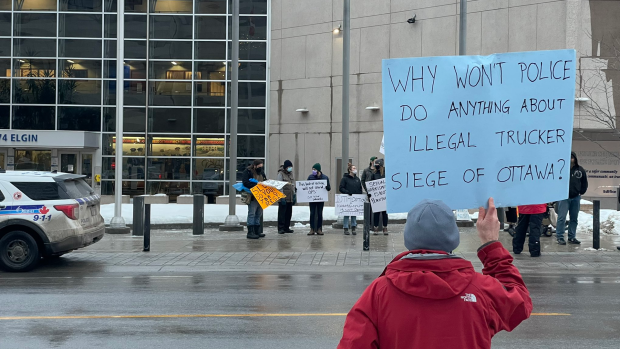 As the ‘Freedom Convoy’ demonstration in Ottawa drags on, residents downtown say they are struggling and one councillor is calling it a “living hell.”

The downtown area continues to be filled with the sounds of truck horns and the smell of diesel as hundreds of people and vehicles block streets to protest COVID-19 public health measures.

“I am sorry for the living hell that you are enduring,” said Ottawa Police Services Board chair and Coun. Diane Deans during a media briefing Wednesday on the situation.

Residents have said they’re afraid to leave their homes, and the Cornerstone Housing for Women says women have admitted themselves to hospital due to the increased trauma from the noise and fear.

“Citizens of Ottawa are trapped in their homes and fear leaving because they’re being harassed,” Ottawa influencer Chantsy said on Instagram. “There’s noise pollution caused by constant honking.”

Residents living in Centretown and Lowertown have dealt with days of constant horn honking and disruptions. On Wednesday, a small group of residents gathered outside Ottawa police headquarters to protest the police handling of the protest.

“The noise is constant, the tension is palpable,” said Rhys McGraw, the organizer of the protest outside the Elgin Street headquarters.

McGraw says it’s been a day-to-day “constant level of intimidation and harassment” for residents in the area.

“My neighbours live on streets that are effective occupation.”

A petition has been launched calling on Ottawa Police to evict the Freedom Convoy. As of Wednesday afternoon, nearly 11,000 people have signed the petition.

“Ottawa Police has done nothing, except curtailing the worst offences (after statue and monument desecrations),” said the petition. “Enough is enough – we support the right to protest. But even if this was a legitimate movement with a coherent message, it would still be past time to allow the normal and harmonious life of the city to resume. We demand that the police of this city do their job for this city, and that means clearing streets, and ticketing vehicle and noise infractions. Not taking selfies and making excuses.”

“The range of illegal, dangerous and unacceptable activities is beyond the ability to list and it has had an immeasurable impact on your lives, your family’s lives, the business livelihood of this city,” said Sloly on Wednesday.

“Residents have been the victims of intense noise, threatening behaviour, hateful vitriol that has no place in our city.”

The Cornerstone Housing for Women says the last six days “have been extremely stressful” for people experiencing homelessness and frontline staff in the downtown core.

“Women and staff are scared to go outside of the shelter, especially women of colour, being able to go outside is the only reprieve many women experiencing homelessness have and they cannot even do that,” said Cornerstone in a statement Wednesday afternoon.

“The incessant honking and noise from the trucks have caused significant anxiety and distress for staff and shelter residents.”

“Women have slipped into relapse and are using drugs and different substances. The team had increased usage of naloxone over the weekend because women are just trying to find any way that they can cope,” said Davis.

Cornerstone says the cost of this protest on the city for three days would fund its emergency shelter for more than an entire year.

“Our shelter system cannot take one more day of the consistent noise and fear,” said Cornerstone. “Housing and health-care support is desperately needed, and this protest is only going to further our housing and homelessness crisis. We must get our city back.”

The unions representing Ottawa’s health care workers are calling for an end to the “protestor control” of the downtown area.

“Sleep deprivation, extreme noise and harassment are impacting the mental health of our downtown community which includes frontline health care workers,” said a statement from the unions.

“The most vulnerable people are not able to access the services they depend on. The health of our city and its residents is at stake.”

The unions, which include CIPP, CUPE and the Ontario Nurses Association, are calling on all levels of government and police services to end the protest, saying it “threatens the health and safety of our members and of the communities they work tirelessly to serve.”

MESSAGE TO OTTAWA RESIDENTS FROM ORGANIZERS

In a media release Wednesday morning, convoy leaders said they regret that Ottawa residents are “bearing this inconvenience.”

“We understand your frustration and genuinely wish there was another way for us to get our message across,” organizer Chris Barber said.

“But the responsibility for your inconvenience lies squarely on the shoulders of politicians who have prefer to vilify and call us names rather than engage in respectful, serious dialogue. The fastest way to get us out of the nation’s capital, is to call your elected representatives and end all C-19 mandates.”

The 613-819 Black Hub is calling on the Ottawa Police Services Board and City Council to fulfill their obligations to provide community safety and well-being to all residents.

“They really are treating this particular protest with kid gloves despite the social media just brimming with all the accounts of how these folks are breaking the law,” said Robin Browne, Co-Lead of 613-819 Black Hub.

The group notes there have been “dozens of violent incidents” during the protest, including homes being vandalized for having Pride Flags, harassment of journalists, incidents at the National War Memorial and reports of women being threatened and intimidated.

In its statement, 613-819 Black Hub noted no charges had been laid. Three people have been charged as of Wednesday.

“This is in stark contrast to how police responded to Black and Indigenous protesters who blocked one Ottawa intersection in November 2020 to protest police treatment of Black and Indigenous people following the October 2020 acquittal of Ottawa police officer Daniel Montsion in the death of Abdirahman Abdi,” said the statement from 613-819 Black Hub.  The statement condemned what it called the “racist double standard of police response to trucker convoy.”

“We’re pretty sure that if those truckers were Black and Indigenous there’d be a different reaction for sure,” Browne said in an interview with CTV News Ottawa.

Restaurants Canada is calling on protest organizers and public officials to let food service workers get back to work, saying “enough is enough.”

Several residents in Centretown and the ByWard Market have remained closed due to the protest.

“The current protests in Ottawa are only adding to the unprecedented challenges of the city’s hardest-hit businesses, depriving restaurants of their freedom to welcome back their customers and adding to the massive debt they’ve been accumulating from lost revenue, lost inventory, and repeated reopening and rehiring costs,” said Restaurants Canada.

“The outcome has been continued harm to already struggling small business operators, tons of lost food and employees that are not able to come back to work.”

‘Supreme Court intervened too much, now it has to back down’ ocn news