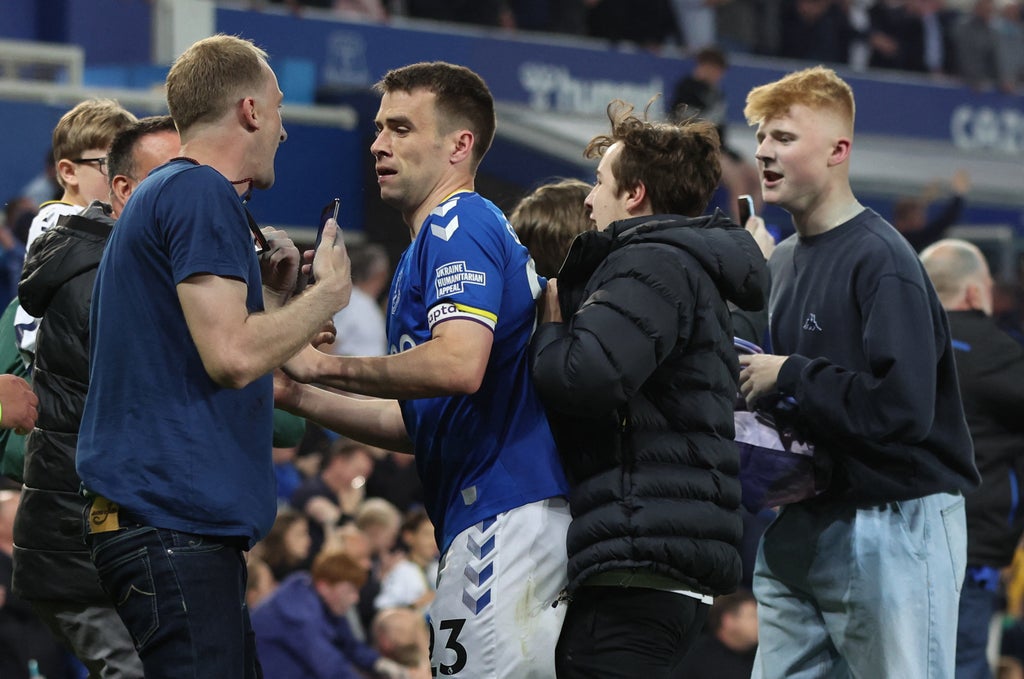 The Premier League said it was “concerned about fan behaviour” ahead of this weekend’s final round of fixtures after a series of worrying incidents but blamed “reckless actions” on a “small minority of fans”.

A number of midweek games across the football league pyramid were marred by violence, culminating at Goodison Park last night, where Crystal Palace boss Patrick Vieira sent off an Everton fan after he been mistreated during a pitch invasion.

On Tuesday, Sheffield United striker Billy Sharp was charged and punched in the head by a Nottingham Forest fan following a pitch invasion at the end of the Premier League Play-Off semi-final two teams, with the supporter then jailed for 24 weeks, while Blades striker Oli McBurnie is being investigated by the FA for an altercation with a fan.

There were also incidents of violence by pitch invaders against players in both League Two semi-finals, prompting the EFL to threaten to partially close stadiums for clubs as punishment for clubs failing to control crowds next season.

On Friday, Newcastle boss Eddie Howe admitted he was concerned about the safety of both teams and players ahead of his side’s trip to Turf Moor on Sunday, where Burnley must equal Leeds’ result at Brentford to secure their Premier League status for next season. .

Brentford, meanwhile, are preparing their biggest ever police operation amid fears of violence by roving Leeds supporters.

A Premier League spokesman said: “The safety of everyone involved on matchday is our priority. Ahead of the final round of Premier League fixtures on Sunday, advice on handling pitch incursions has been re-issued to clubs as a reminder of protocols.

“The issue will also form part of all pre-match security briefings and operational meetings. The Premier League will continue to assist and support the home club in the running of a matchday and clubs will put in place all procedures necessary to ensure the protection of players, staff, match officials and supporters.

“The Premier League has encouraged clubs to remind supporters that it is illegal for them to enter the pitch at any time and may result in criminal records and stadium bans. We will continue to discuss and resolve the ongoing issue. supporter behavior with the FA, EFL and other football partners ahead of the start of next season to ensure matches are safe environments for all.

Floods in British Columbia: Evacuation alerts in the Fraser Valley ...

Games Inbox: What was the best Nintendo Direct Mini game? ...

Have your say: Would you buy a house because a...

5 jaw-dropping moments from this hearing about the US Capitol...

Housemates take their chance to reward Pauw’s faith in youth ...