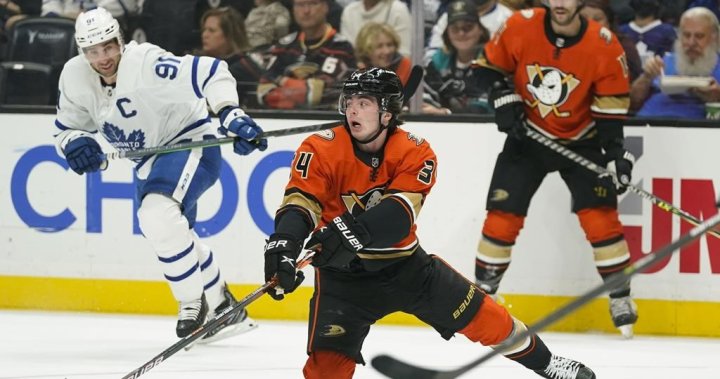 ANAHEIM, Calif. (AP) — Michael Bunting, Alexander Kerfoot and William Nylander each had a goal and an assist, and the Toronto Maple Leafs tied a franchise record with their seventh straight road victory, beating the Anaheim Ducks 5-1. on Sunday night

Auston Matthews scored for the third consecutive game, Wayne Simmonds had a goal, and Jack Campbell made 37 saves for the Maple Leafs.

Toronto has not lost away from home since dropping its first three road games. The Maple Leafs swept a four-game trip that started against the New York Islanders and ended by outscoring the three California teams 15-4.

Hampus Lindholm scored and John Gibson made 26 saves for the Ducks. Anaheim has lost four of five following an eight-game win streak.

Scoring chances were hard to come by until Matthews tipped in T.J. Brodie’s shot at 7:48 of the second period to put the Maple Leafs in front.

Bunting made it 2-0 with 8:57 left in the second, burying a one-timer into an open net. Jake Muzzin’s long pass from his own zone to Mitchell Marner sparked a 3-on-1 rush, which ended with Bunting’s sixth goal of the season.

Bunting has two goals and four assists during a four-game point streak.

Toronto’s forecheck forced a turnover in the offensive zone and Kerfoot scored 13 seconds into the third for the three-goal cushion.

Lindholm jammed in a rebound from close range to cut the deficit to 3-1 at 7:26, with Ryan Getzlaf picking up his 19th assist. The Ducks piled on the pressure, but Campbell made the necessary saves to quash their momentum.

Nylander added an empty-netter with 3:07 remaining to make it 4-1, and Simmonds beat Gibson 15 seconds later for the 5-1 final.

NOTES: Matthews has three goals and one assist during a three-game point streak. … F Kyle Clifford started his second stint with Toronto after being acquired in a trade from St. Louis on Nov. 16. Clifford had one goal and two assists in 16 games with the Maple Leafs in 2019-20. … Maple Leafs F Jason Spezza played in his 1,200th career game. … Toronto F Ondrej Kase missed his second straight game because of an upper-body injury.

COVID-19: SFU students plan walkout over concerns about return to...

‘He was the sweetest guy’: Sister of stabbing victim angry...

Soaring demand at U of A hospital ER shifts flow...

Feeling the winter blues? These wellness tips could help

Man thanks fire department after 2 dogs rescued from ice

Punjab Election 2022: Strong measures by the Income Tax Department to...

Once allies, Stormy Daniels and Avenatti face off at trial

Rpn singh quits congress amid buzz of joining bjp ahead of...

Five of our soldiers were killed in an encounter with the...