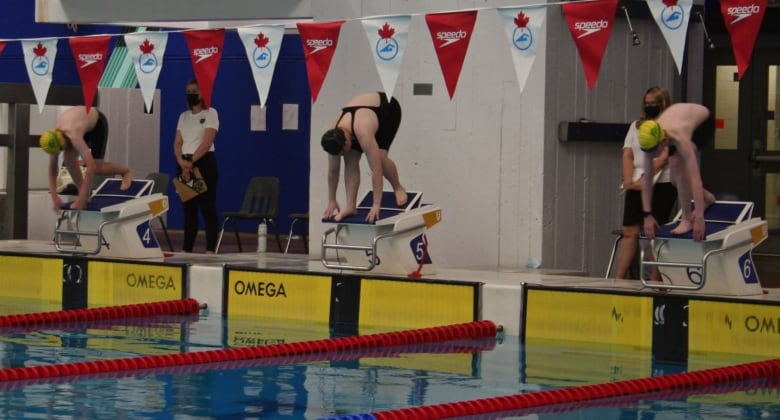 Kahnay Johnson is breaking down barriers in Manitoba swimming by being the first transgender man to compete in the province.

On May 7, the 15-year-old Métis swimmer and member of the St. James Seals Swim Club officially competed in the men’s category at the Bison Sprint Invitational meet hosted by the University of Manitoba Bisons swim team in Winnipeg.

“It was really cool, it was a bit scary, but I think everything is a bit scary [the] first time,” he said.

Kahnay finished with some of the best swimming times in her career in the 50-meter freestyle, backstroke and breaststroke categories. He said he was happy to be an example for others in the sport.

“I think being able to swim into my authentic self is really good, and I really appreciate the fact that I’m able to do that,” he said.

Kahnay said Swim Manitoba contacted him to see if he was interested in moving up to the men’s swimming category. He then re-entered as a man, after five years of competing as a woman. Although he was unable to maintain his previous swimming times, he said he was always grateful for the opportunity and the chance to inspire others.

“I hope it becomes a more easily accessible thing for people when they’re changing, when they’re going out, so everyone can feel that sense of support,” he said.

One of Kahnay’s biggest supporters is her mother, Colleen Johnson.

She said since Kahnay came out as transgender last year, it’s been a different journey, especially with the sport split into two genders.

“It made it a real challenge as Kahnay tried to figure himself out,” Colleen said.

“It made the situation uncomfortable, especially when it came to changing rooms, and where do you stand.”

She said that since many facilities in the city don’t have gender-neutral locker rooms, it could deter LGBTQ youth from participating in sports.

“I hope what Kahnay has done will bring more awareness, and maybe they can look at improving that experience, especially for troubled kids,” she said.

Colleen said she hopes sports can accommodate more mixed-gender teams. She said the kids just want to fit in.

Colleen said she was “super proud” of Kahnay.

“He was brave through it all,” she said.

“Kahnay taught me so much that I never really knew and understood, so he was a great teacher. [It’s] amazing for me to keep growing through his eyes, so that was awesome.”

St. James Seals head coach Josh Koldon was Kahnay’s swimming coach for a year but knew him from the pool before he transitioned.

“Sports tend to be named like boys club or girls club… it’s really important to show that inclusiveness and make people feel comfortable in their shoes and allow them to compete the way they want” , said Koldon.

“Watching him come back after the pandemic and after the transition, he’s definitely been a lot happier. He likes the water a lot more.”

Reliance on renewables could lead to power outages in Michigan...

Grimsby home destroyed by devastating lightning is up for sale ...

Canadians love spending time in parks, but those visits come...

Reliance on renewables could lead to power outages in Michigan this...

Grimsby home destroyed by devastating lightning is up for sale OCN...

Deganga Chaos: The necklace of a panchayat member has been torn...

Canadians love spending time in parks, but those visits come at...